i generally take off the last and first week of the year as a winter vacation. while i would love to say that i typically spend all of that time relaxing with friends and family, and i do some of that, i typically put together a list of things i want to get done during that time. one item that is frequently on that list is cleaning my office or garage. while i typically keep these places relatively clean, i will revisit my organization in those areas typically during this time off. this year is no exception, but i’ve decided to switch things up to begin to age out some of the items that i use very infrequently. i thought it would be helpful to write this down here.

what is the as-is situation?

currently i think of all of my tools and equipment and random things as ‘piles of stuff’. i go through the piles of stuff and pull out what i need and then i typically put it back, but not always. over time, the stuff not put away ends up in piles in my office or somewhere else. these piles at some point need to be put away or forced out of the way for some more pressing need. this means those piles get merged into slightly larger piles by way of being put into some boxes or containers which get put into the garage. over years this leads to this kind of pile of piles. =)

the main issue is the same as anyone, sometimes i need something and i can’t find it. sometimes that means i have to buy another of the same thing, or sometimes i find an extra one or whatever. this cycle repeats and the piles grow. every so often, i go through and try and clean up a bit, put some stuff into buckets/bins to organize, etc. but i haven’t really strictly adhered to any kind of planned method or anything.

thinking about what to do?

well, there are a million ways to address this problem. ‘problem’ is probably a little much for a situation which really just boils down to ‘have too much stuff’ or ‘when item not found, buy replacement’ which are very nice problems to have. 😀 that reality aside, it is an annoying problem that grows over time and so i’d like to address it. one way i address this with my paperwork is by just archiving paperwork from time to time. typically i put everything into a box based on the year and maybe quarter or month if needed, then i store that. most things are digital so the times i need to go back are very rare, usually only for tax season if i don’t straighten everything out very quickly.

so since i need to address the issue of easily getting the stuff i need, this ‘archive everything’ method doesn’t work as well. one thing i have had in my mind for several years was an article i read about how libraries work. they basically keep a cache of the recent books closer at hand before putting them back on the shelf so it’s quick.

since i’m in the it world, this just seems like lifo to me or resembles using a push/pop stack in real life. i had some type of sorting before where i had buckets of specific things. a bucket for ‘cutting things’ or a bucket for ‘batteries’ or something similar, but i didn’t really take an life cycle approach to this, it was more of a pragmatic way to clean up. i would clean up and toss everything that i didn’t want/need and would put away the things to keep in some kind of bin, then i would just stack them up. the end. very simple, but this didn’t have any way to systematically age anything out. i would just ‘age stuff out’ when i moved or we got a car that required reorganizing the garage due to size or, in one rare case, a flood hit us and trashed my shop.

i’d like to avoid doing this in the future, so i’m going to implement some kind of aging system built into the organization

i broke my items to store into several categories. the categories had to be small enough that they would, at most, fit into a 66 qt storage bin, and preferably fit into a 34 qt storage bin. these bins are flat and fit my existing storage shelf very well. It looks similar to this drawing. 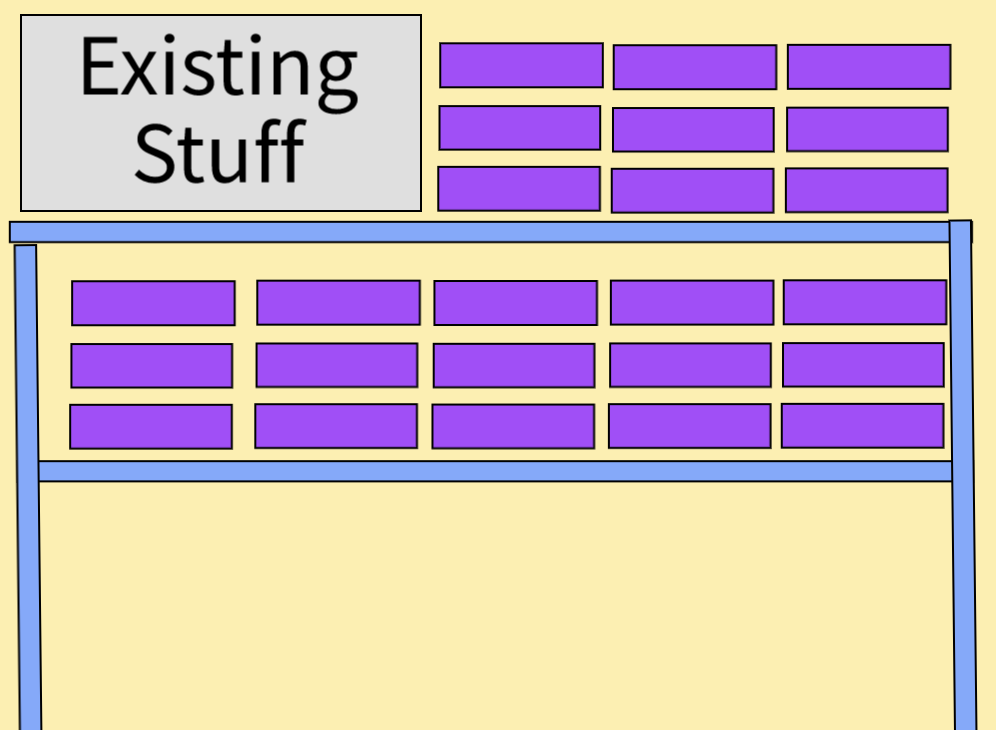 This gives me 8 ‘stacks’ to work with. For most, i would prefer to use only 2 bins, but some items i need to store for longer. So the idea is each bin gets a label and a date. this is how ‘old’ the bin is. anytime i use something from that bin, i move it up in the stack so it’s easier to find. While the most frequently used items I actually have hanging in the wall, or in a tool bag or in a drawer or on a desk for ready use, some things i want to leave in the garage even if they are needed somewhat frequently. So having 3 makes that an option.

beyond these somewhat generic buckets, i moved the ‘tape’ and the ‘battery’ bins into my office as well as one ‘misc cache’ bin. i have room for 4 bins in my office in some drawer type slots, as well as 3 large drawers that can be used for ‘recently used’ storage.

i’ll have to check back in something like a year, i suppose, to really see if this made a major difference. part of this cleaning process was that i also cleaned out a bunch of items from the garage which amounted to a giant green garbage can full of random things, as well as giving a way quite a few tools and misc tech things. i emptied 8 banker’s boxes worth of random items and reclaimed a lot of storage bins (7x15qt, 6x34qt, 1x66qt). due to that mass reduction, there is already a huge difference in my ability to ‘find’ things, but i’m hoping this will have the intended long term impact i am hoping for.

one thing i noticed as i was putting my much smaller inventory back into the garage is that i could really probably just use a general cache instead of stacks. since the goal was just to age out the categories of stuff, it would be easy enough to just pull ‘whatever’ from the archive bins and just use a handful of ‘cache’ bins. then i could resort in a year or two if needed into the specific bins, or have another round of purge since i will know what date i did this purge on. this will have, i think, the same effect, but require a lot less bins. 😀

maybe, with enough time, i’ll have enough bins to organize my sons legos so we can reclaim the dining room. 😀