After moving all of our documents into blob storage and creating an application to search the index for these documents and download them, I discovered some gaps in my original export. I’m going to document the process to correct that here. The main issue seemed to just be some missing data in the export that I filtered out somewhere. I just walked through the process to export and import again down below, and while doing so I checked to make sure all of the data I was missing before, was in fact exported. I didn’t check the counts in my original process at every step because ultimately I was pretty sure I might need to do it at least one more time, and…. well that’s where this article comes in. 😀

Well, nothing terrible. I moved everything and it all worked fine. But while testing with another stakeholder who wasn’t engaged in the original discussion, we discovered some of the index data that was not moved, was something that they used. So I decided to go back and basically rebuild the cosmos db. Not delete the existing one, but just import a new one and update the keys and links to use the new one.

Since I’m having to do this once, I don’t really want to have to fiddle with the old SQL 2008 box (R1, yuck) anymore, so I wanted to go ahead and get this database just restored into a local docker container. I could put it on Azure like I did last time, but would be nice to just dev locally using docker.

To this end, I’ll refer to this page on the MS site to see what to do.

unfortunately, after reading a little bit, i see this:

i’m not a docker expert, so let’s go ahead and open up docker and maybe do some updates, etc.: 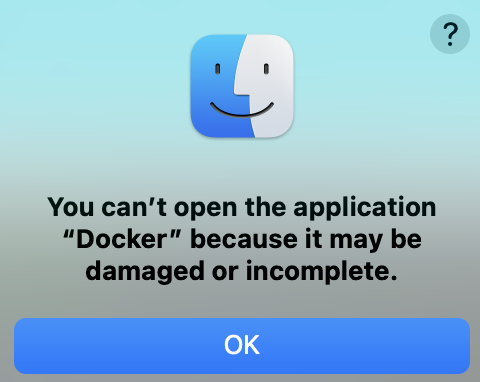 so, instead i did a brew upgrade docker…. ? No daemon running… ok, so reinstalling we go. 😀 I’m leaving this in because I like to record how many silly things you run into when you want to do some ‘simple’ thing. 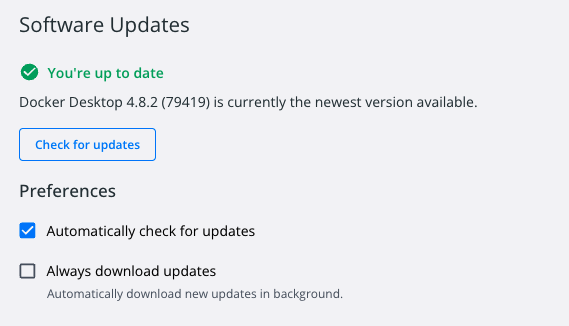 So now that docker is up and running and seemly all patched, let’s… mount a volume or something so we can restore from backup. First will start copying this file from the server:

noooo…… why so slow. my connection is good and it’s only 80GB. not the tiniest thing in the world, but not that big. 1.5MB/s i believe is what that works out to….

ah well, that’s what’s up I suppose, so we’ll just see how it goes for now.

since I’m using M1 mac, I’ll run the following as we need to use a different image. So.. if you’re following along you’ll need to install that image as well. I believe the command needs to be modified something like this. my bak file is in the downloads folder right now. I have a random password below, feel free to sub in your own!

after some fiddling, i seem to have my -v commands working backwards. i trashed my containers and ran this instead:

excellent! i got prompted for access to the downloads folder this time and was able to open up the cli and navigate and see my files. if this file was smaller, i could just copy it into my docker container as noted in the ms article with docker cp, but i’m just going to mount that folder and restore it from there. For this I just used the steps here:

While I wait for my file to copy, I’m going to go ahead and test my mounting/restore setup with the file from MS.

well, good thing I’m testing as I get this as the output:

i also noticed that i can’t connect to the server running that that machine like i did the other day. hmm… ok, let’s start over a little as i know i was able to run and connect to this the other day. docker is freshly instealled, so i am wipe the images, containers, and volumes. now we should be fresh.

per my documentation the other day i ran the following in powershell and was able to connect with no issues:

let’s try and run closer to that. i can see i stuck with 1433 instead of mapping and included a hostname. let’s see if adding that allows us to get moving. we’ll add our volumes in as well and cross our fingers. i did previously download the regular sql2019 image and that was removed between these attempts. maybe there was a part of that that was supporting this image. not sure, but we’ll know shortly. 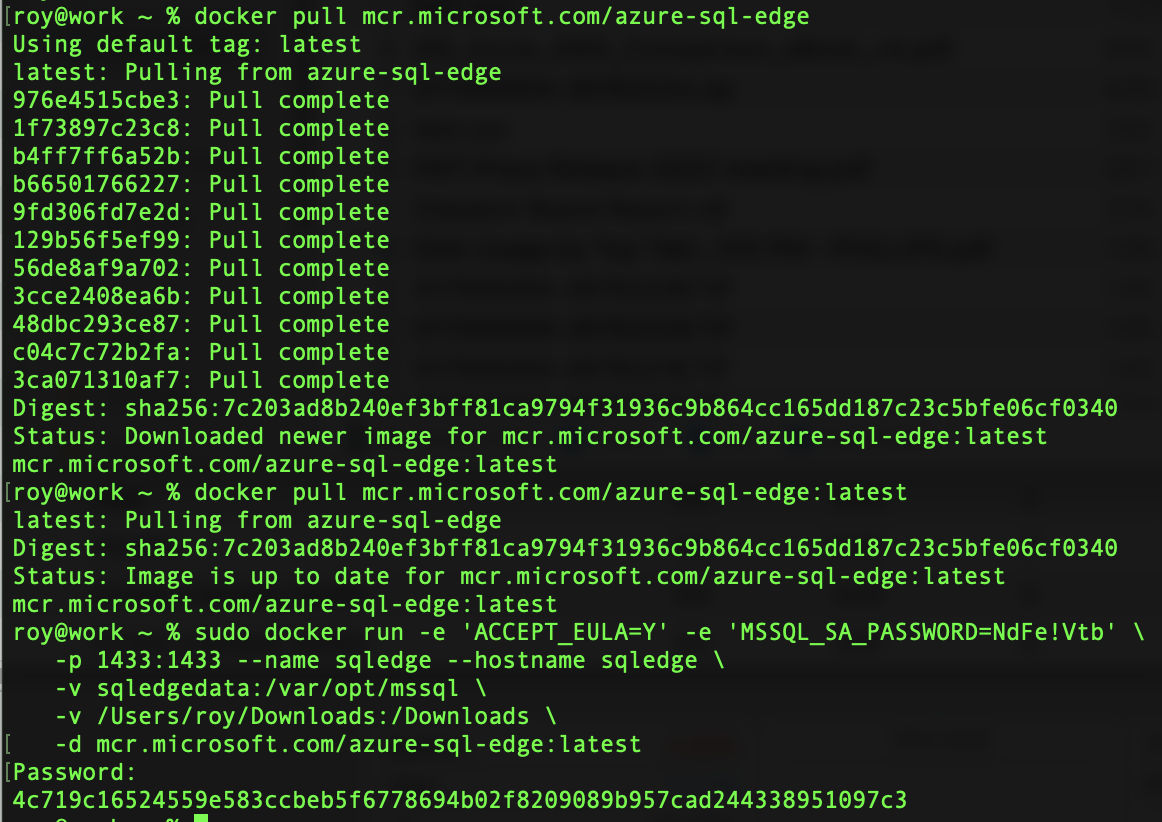 Apparently not. Maybe I can just connect to the machine like before? 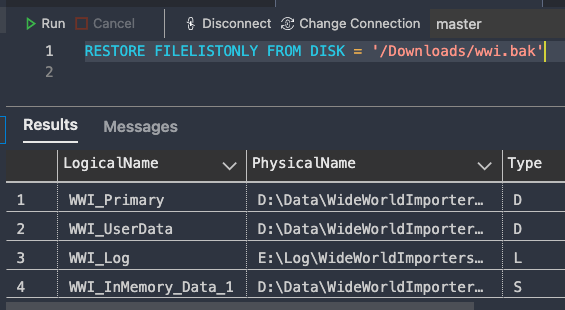 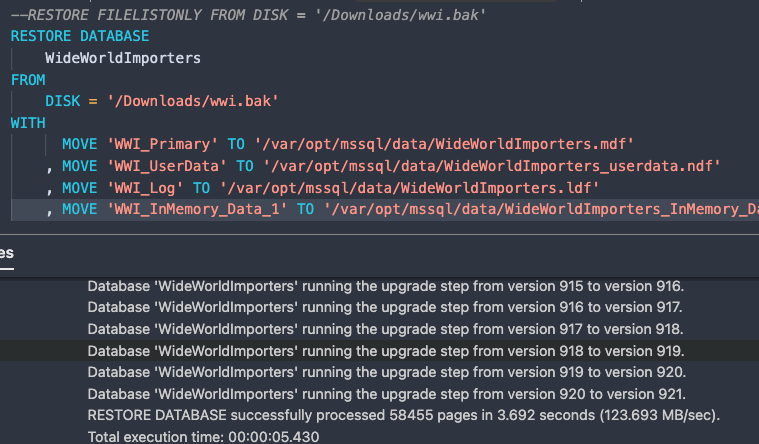 and finally, as expected, i can select some data. so that’s nice. 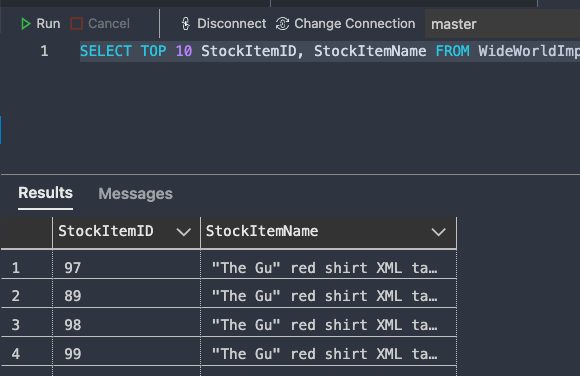 I guess that sqlcmd must not be part of the m1 image. That’s ok! Sadly, after about 10 hours, the copy failed because the backups ran for that night. I was concerned this might happen, but figured I would just start the copy that evening, and instead use rsync this time.

This is working, but also very slow. But should be finished with plenty of time today. I believe this same issue happened last time and due to this I ended up fiddling around on the original server….. guess what? it’s starting to look like that’s what’s about to happen again. 😀

At least it was! until I got tied up doing some other stuff. So now it’s finished, yay! 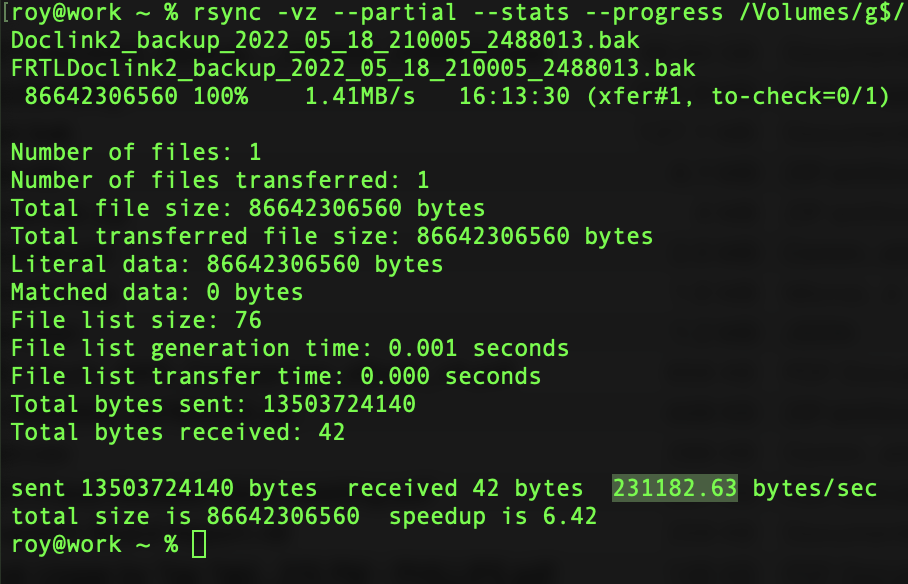 I tried restoring but didn’t have enough space on my docker image. I tried restoring out to my /Downloads volume, but that didn’t seem to work either. I’m guessing there is a way to fix that, but I decided to simply tackle the space issue on the container itself. I searched for the error and docker and found somewhere that said that sql on linux will not expand anything, so you just get an error that is related to that.

I fixed this by bumping my space up. below is my ‘post’ restore space used.

and after a little bit…

Now we’re golden! I think for this next part, I am just going to annotate a bunch of sql while I get the data staged.

I already did this process once before. At that time I exported the data to CSV and then converted that to JSON. At that time, I was working on a remote server, so I just did things that way. For this I am working on a local docker copy of sql, so I am just going to do attach directly and convert it using powershell locally. That looks like this:

The query needs to be adjusted to fit, and you can change the name of the output file, but this is the way. This basically converts the table structure like this:

which we can just import right into cosmos. 😀 you don’t have to have the id mapped in here as you can generate them on the inbound, but i had some id values to use already. these id values don’t have any real value, but since they are there, i figured i would just use those for now. last time I did this, I simply ran this a year at a time, but this time I figured I would give it a whirl just converting all of the 2017plus data at once. selecting it was fine and only seemed to take a couple of minutes. the hash to json process took a little bit longer though. about 25min i think. and it wasn’t too huge when completed.

Unfortunately, when I tried to upload this file, i got an error. but i can’t tell what is wrong because there is no notification and the error seems to run off the page. 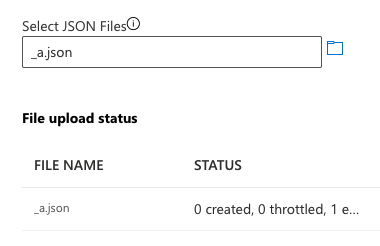 So fine… we’ll do less data at a time and see how that goes. 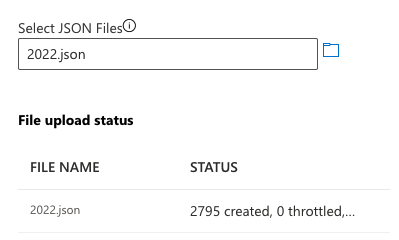 maybe there is a size limit or something i didn’t hit previously as last time i did a year at a time.

worked like a champ, but took a couple of minutes this time instead of a couple of seconds. still, not bad and working as expected. 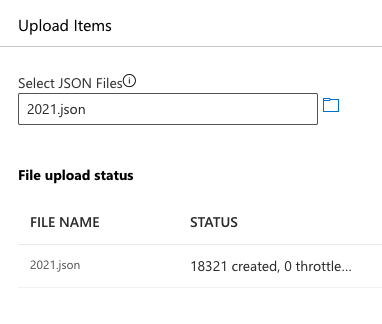 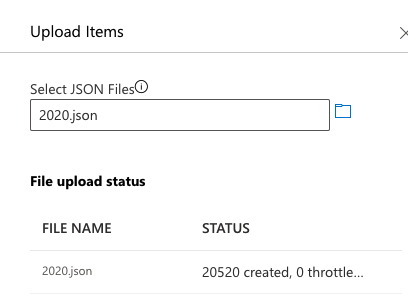 also, the extractions from the db were pretty near instant with these three years. 2019 was more than triple at 9.3MB in for the file. while the export from the db was quite quick, the import took longer. but still it’s linear, so it took about 3 times as long. but that is still pretty fast.

quite a jump on 2018 in size and it took about 5 or 6 minutes to export instead of like a minute.

quite a lot more to import and it took quite a bit longer. almost 2.5 hours. still not too bad. 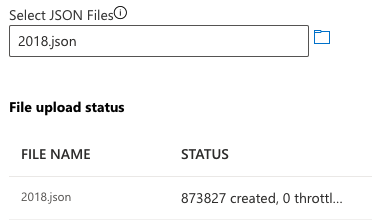 I’m not going to post screenshots, but 2017 was similar. 265MB file instead of 210, so about that much longer i’d imagine. i just fired it and checked to make sure it was good that night. edit: i wrote the previous sentence because that was what i was expecting. but i was incorrect. 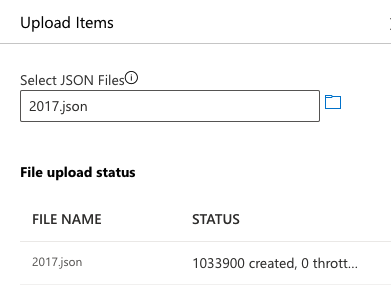 not way way more documents, but it seems like it took more like 5 hours. maybe a bandwidth thing?

I’d say the lesson learned here is that smaller uploads seem to work way better. there are other ways to get the data into cosmos, but since this is just a one time thing, i didn’t really go down that road. someone who has read the multiple articles about this might say that this isn’t a one time thing because i have already done this a few times. but i mostly meant this isn’t feeding from a system so there isn’t a need to create any kind of robust automated import process. As of writing this, it appears that this page on MS describes how to do this via code.

After this, the documents showed up as expected and all was well with the world. 😁